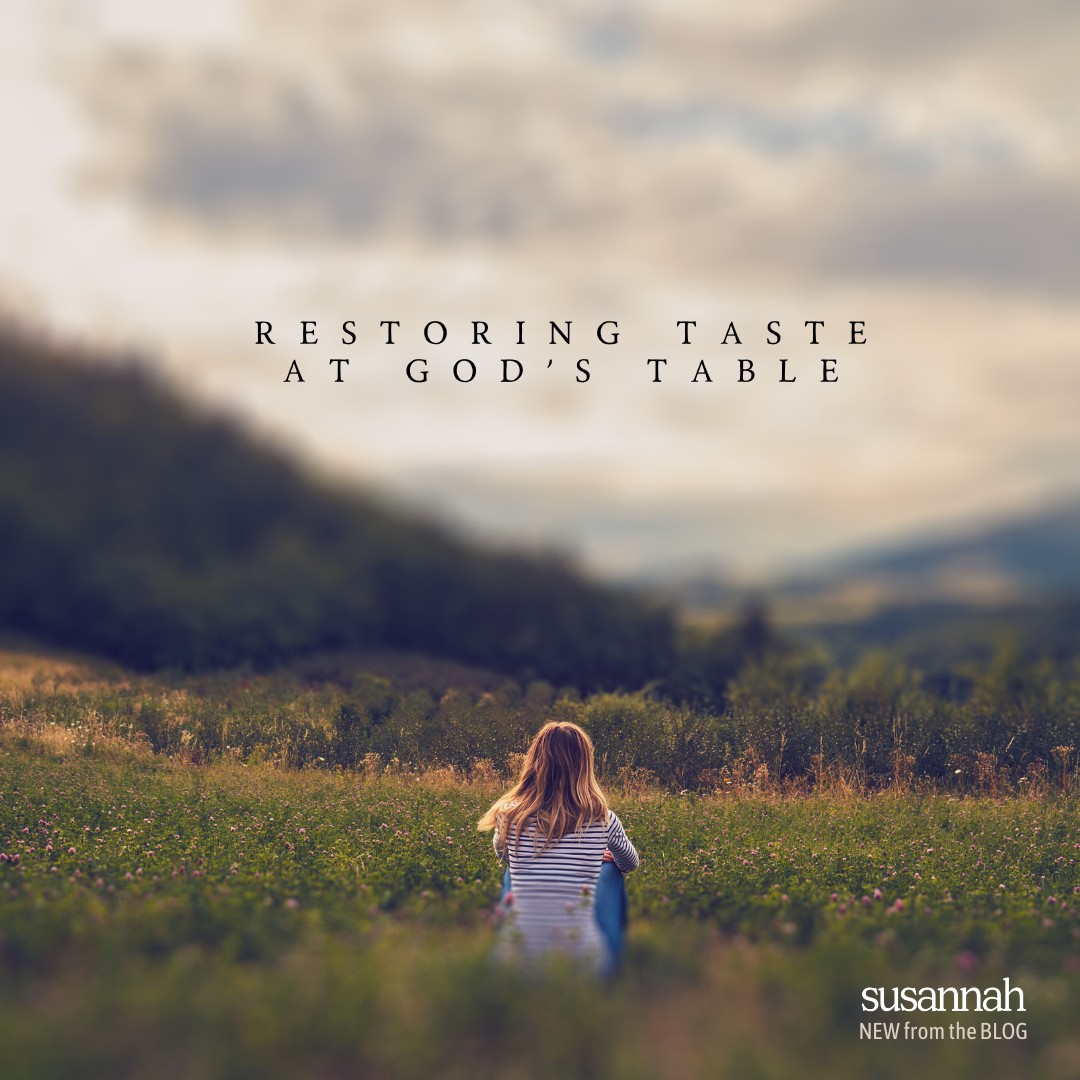 We’ve already talked about the change that takes place when we begin the process of restoring through our senses. As promised, this week—as we edge closer and closer to Thanksgiving, we’ll focus on restoring through taste. Before you begin, though, it’s a good idea to review the blog, “A Taste for Restoration,” and look at your answers to the five questions that assess the state of your spiritual sense of taste.

Ironically, the change in my life began as I faced life events that represented failure through tasting truth and love instead of fear. I did this in two ways: through time meditating on God’s Word and through counseling.

The passage God used to help me move from staying stuck in a bitter taste of failure and shame is one of my favorite passages in all of Scripture, Psalm 23. My grandmother was my third grade Sunday school teacher, and as part of her curriculum, she had each of her students memorize Psalm 23. As she sat in one of the small Sunday school chairs made for little people, I stood nestled against her knees and began to recite my Psalm.

The Lord is my shepherd; I shall not want.
He makes me lie down in green pastures.
He leads me beside still waters.
He restores my soul.
He leads me in paths of righteousness
for his name’s sake.
Even though I walk through the valley of the shadow of death,
I will fear no evil,
for you are with me;
your rod and your staff,
they comfort me.
You prepare a table before me
in the presence of my enemies;
you anoint my head with oil;
my cup overflows.
Surely goodness and mercy shall follow me
all the days of my life,
and I shall dwell in the house of the Lord
forever.

I did not know then how those words would shape my life and restore my view of God and myself when I needed it most.

As I met with a counselor on a weekly basis, we identified eight specific places where I felt stuck in failure and shame and needed to grow. While we worked on replacing a narrative of shame with a narrative of grace and a new lens through which to see my past, present, and future, I meditated on Psalm 23, line by line. Little by little, the truth and healing medicine found in each word began to replace the food of fear, anger, shame, and failure I had eaten for so long.

One morning, as I sat with my Bible and cup of coffee, I meditated on this line from Psalm 23: “You prepare a table for me in the presence of my enemies” (v. 5a). And I wondered:

From Genesis to Revelation preparing a table for someone isn’t just about preparing a good homemade meal; it’s about preparing a place where someone is accepted, welcomed, and wanted. A table is the ultimate symbol of belonging, and I realized this table God was preparing for me was not in the absence of enemies but in their very presence.

The enemies of my soul that had plagued me for so long—rejection, fear of abandonment, failure, and shame that prompted such selfish, sinful responses in my soul of withdrawal, anger, jealousy, depression, anxiety, and self-pity—were not conquered by my own efforts. God was there in them, preparing a place for me at great cost to Himself so that I could sit down and feast on the meal He had made for me.

In his book The Good Shepherd, Ken Bailey explained that a table in the ancient Middle East meant more than it does in the Western World today. Preparing a table meant the guest’s enemies became the host’s enemies. If anyone attacked a guest, they were now attacking the host, and it was his or her responsibility to protect and defend the guest. A host in the Middle East cannot set a table for a guest in the presence of their enemies without incurring great wrath on himself. That, I realized, was the place God had set for me all along.

The table He has set for me cost Him the life of His very own Son. He serves me the meal of His blood and body at ultimate cost to Himself. And if He was willing to clean up the mess of my sin at the cost of His very own life, how will He not then graciously give me all things (see Romans 8:32)? If He was willing to clean up the ultimate mess, what makes me think He would check out of cleaning up every minor mess along the way, especially the messes of my own making?

That one little line from Psalm 23 changed everything for me. It restored my soul. It gave me a lens through which to see my failures. I was not alone. Even and especially there, God was with me. He had secured a place of belonging for me where I had created the biggest messes.

His goal for me in this life was not for me to stop making messes; instead, I was to sit down at the table of His grace and mercy every time I made a mess. I was to sit down at a place He had already prepared for me because of the messes He knew I would make. The goal was for me to learn to serve that same meal of grace from that same table to others when they made messes and wronged me.

At the end of my life, when I go to be with Him, His mercy and goodness will follow me, and in His house, I will dwell mess free forever (Psalm 23:6; Revelation 21:3–4). But until then, I have a table to go to where my name is known, my messes are cleared, my enemies are fought, and my place is waiting beside my Host.

As I learned to receive this grace from God in the areas where I was not perfect but failed regularly and miserably, I was better equipped to extend it to others. Or, at least, I could ask them to pull up a chair at the table beside me. I knew a Host who had more than enough.

It was then that my table expanded. The table of God and the meal of God is for sinners. It’s for the mess-ups, the failures, the dragged downs, the weary, the anxious, and the depressed. The table and the meal are for those who need to have their messes cleaned up by a God who is just waiting to gather them in. Failures like me. The invitation at this table of grace remains for us all. Mercy and goodness are waiting.

As you look around your table this Thanksgiving, may this be a reminder to give grace and forgiveness and love because God has given you more than enough to invite others to join you.

For more information on restoring your attachment through your senses or earned secure attachment, check out Susannah’s book, Restore and download the first chapter for free!