My husband grew up in a male-dominated household. Yes, he had a mother and a sister, but his larger-than-life father, my husband, and his two brothers dominated the scene. They are all tall, broad-shouldered, and their favorite past-times include hunting, sports, anything outdoors, and did I mention hunting? My sister-in-law, Cara, and my mother-in-law were great sports about everything sport-related. They went with the flow, learned to like watching any sort of game with a ball, and my sister-in-law even consented to being nicknamed “Carl.” I will never forget going on a hike with my mother-in-law a few years into marriage; we saw a clod of dried animal poop on the trail, and I as skirted around it, SHE PICKED IT UP. WITH HER BARE HANDS. And proceeded to carry it down the mountain so she could ask the guide at the bottom what kind of animal made a mess like that. If that woman isn’t a great boy’s mom, I don’t know who is.

All of this to say that I find it one of life’s greatest ironies that out of my father and mother-in-law’s ten grandchildren, eight are girls. Yes, that’s right. Eight. Four belong to Jason’s sister, Cara, and her husband, Lance. Four belong to Jason and me. And the two boys (bless their hearts) belong to Jason’s brother, Jake, and his wife, Haley. The last remaining brother, Josh, and his wife, Laura Grace, have yet to have children, but even if they have four boys, the girls will still rule the roost in the Baker family. Irony is sweet sometimes.

When we returned from China, the Berkmans (Jason’s sister’s family) were on their family vacation, trekking through the mountains of Montana. But last Saturday, as soon as they landed, they made a bee-line for our front door to meet the newest Baker/Berkman cousin. And let me tell you, it was a moment. I think Mia Grace is still wondering who all those females were swarming around her, squealing with delight.

I’ve tried to guard Mia Grace from too many “overwhelmed” moments, but this was just one of those moments she was just going to have to be overwhelmed. As she was passed from loving arms to loving arms, I kept thinking, “You have no idea how much you are going to love these people one day!”

It was the same feeling I had at the airport when she encountered so many loving arms and faces of dear family and friends.

And shock of all shocks, the person she preferred most out of everyone was…Lance.

My oldest niece had to pry her out of his arms so she could get a hug in! I’m thinking she just new a great-girl dad when she saw one.

The girls were so sweet with MG; they walked her around and around the house…

spilled her toys out on the floor and played with her…

and even helped me give her a bath…

I have loved watching the way kids love on Mia Grace in a way that is so natural, open, and all-embracing. They never ask about her nose or lip, never are stand-offish because her skin is a different color, and never seem to wonder about the fact that her past is so very different from theirs. They just love her. Fully. Right where she is. There is a something about the heart of a child that loves another child with a need so deeply, and that is something I have never had the privilege of observing until the past few weeks with Mia Grace. From Berkman cousins, to Baker boy cousins, to Ince cousins, to neighbors, to dear friends, children love and embrace this child, and it is so moving to see.

Hannah, the oldest cousin, spent the week with her fellow cheerleaders at cheerleading camp, and I know how much she has missed seeing Mia Grace. So last night, I did another thing that probably wouldn’t rank as a top ten moment with most newly adoptive parents – (I’m still feeling a bit of mommy guilt) – but I surprised Hannah, along with the other ten cheerleaders, with a surprise visit from Mia Grace.

It was priceless to see MG in the midst of all these girls who looked nothing like her, had nothing in common with her story, but hung on every word and were captivated by all 17 pounds of her. I pray in the midst of cheerleading camp, God did something in the hearts of those 14 year old’s. Who knows? Maybe there are a few adoptive mommas in there one day…

One last thing – one morning this week as I went to refill my cup of coffee, I noticed a text message on my phone from Cara. The message read, “We were wondering what it feels like to be Mia Grace” and had this picture beneath: 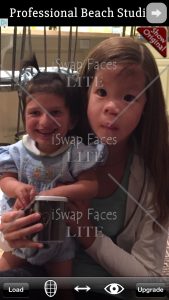 I laughed so hard I think I snorted coffee up my nose! Only Cara. Or, should I say, only Carl…there are definitely benefits to being raised by brothers.

But in Mia Grace’s case, instead of a brother, her Uncle Carl will do just fine 🙂

Hi, I'm Susannah. I’m a writer, Bible study teacher, and founder of Restore. After walking through my own journey of healing and restoration, I live with this vision in my head and heart - Restoration for a Generation.  Restoration that begins with you and me.