Because for so long, for over two years, there was always so much uncertainty.  Who would our child be?  What would she look like?  Would I ever have enough courage to make it through the piles of paperwork to even get a child?  If we did, what kind of medical needs would she have, and what kind of surgery would be involved?  What would her temperament be like?  Would she be a cryer, a tantrum thrower, tough as nails, or solemn and sweet?  What was her story and how much trauma had she endured?  How would my biological children adjust?  The questions, anxieties, and uncertainties were endless.  But here we stand almost one year later with a trip to China behind us, a mound of paperwork in our past, and Mia Grace Baker in our arms as a permanent part of our family.

But as I think back over the past year, if thankfulness is our primary emotion, becoming has been our primary action.

What I mean is this: there was a moment in time, a singular moment in time, when LingYu Xu, legal ward of the Chinese government, was brought out of a back room with a curtain, clutching a kleenex in one hand and a tiny shovel in the other hand, her head drenched with sweat, and placed into my arms.

In that moment, that singular moment, LingYu Xu became Mia Grace Baker and instantly went from orphan to adopted, alone to surrounded, and abandoned to beloved.  She went from having no one claim her as their own to two parents, three sisters, four grandparents, ten aunts and uncles, nine cousins, twenty five neighbors and a host of beloved friends and wonderful extended family clamoring to hold her and love her as their own.  She was welcomed in in every sense of the word in a display of love that still makes my heart swell with thankfulness.

But as much as Mia Grace became our daughter in a single moment through the gift of adoption, Mia Grace had to become our daughter over the past year through the gift of adoption. And that was something I was not quite prepared for.  It sounds ridiculous now to even admit it.  I mean, how could I have expected a child who had a revolving door of caretakers, never heard one word of English, nor seen a white person to instantly trust a woman with pale skin who looked nothing like her and spoke in a strange dialect to trust me as her primary caregiver and mother?

But as strange as it sounds, I think I did expect this instantaneous bond of deep affection and trust to occur.  But that bond is something both Mia Grace and I have had to work hard on this past year.  I never knew it would be so painful to have someone who calls you “Momma” to reject dependence on you at the most basic of levels.  To stuff and hoard food in her mouth and refuse to swallow.  To refuse to let me hold her bottle and hold on tightly with her two little hands while pushing my hands away.  To refuse to face me in the rocking chair and snuggle in and demand to always face outward, a position she can control while monitoring the room and keeping a safe distance away from me.

She had no idea in her little seventeen month old self how hard her independence was on a momma’s heart.  But she wasn’t in daughter mode.  She was in survival mode.  She was in abandoned-orphan mode, even though she had been adopted.  And because of that, Mia Grace had to learn how to become.

And she has come so far.  In less than a year, as long as I have read the requisite two books before nap time or bedtime, she will face inward and let me rock her for a long, long time.  She still refuses to close her eyes or fall asleep in my arms and let go of complete control, even if I know she’s exhausted.  But hey, I will take what I can get.  After a year, she will actually eat and swallow about four or five bites of meat or a protein before stuffing the rest in her mouth and make me fish it out an hour later, but a quarter of a hot dog is better than no hot dog at all.  After a year, she will approach me from the front to give me a hug instead of only feeling comfortable enough to hug from behind.  After a year, she has stopped reaching up and out for strangers to hold her and is content to be in mommy’s arms.

But we still have a long way to go, and as I have said before, orphan habits like control, fear, independence, and survival die hard.  They’re a lot like that little shovel she came out clutching so tightly in her hand in China.  After several days of holding the shovel, eating with the shovel, and sleeping with the shovel, I finally had to pry it out of her hands.  I don’t think she held on to the shovel because it was a great toy or help to her throughout her day.  I think she held on to it because it was the last familiar thing she took in her hands from the orphanage.  She held on to it because it was comfortable and familiar.  Orphan habits are a lot like that.  It’s not that they’re so great, or so fun to play with, or helpful to us throughout daily life.  It’s just that they are the last familiar remnants we hold on to from the orphanages we once knew and called “home.”

Just like Mia Grace, I have orphan habits too.  In fact, perhaps the hardest part of adopting Mia Grace has been the way that she has made me look at my own orphan habits.  And in order to help her put her habits and control tendencies aside, I’ve had to put mine aside first.  And if I’m honest, that’s been really hard to do.  To make her stop trying to control, I try to control right back.  And trust me – I’ve learned this one from experience – you can’t fight control with control.  Someone always ends up broken in the process.  You have to fight control with humility and love.  When she begins to act out in fear, I have to help her go back to the place where the train derailed, back to the point in her heart and mind where she was left and abandoned by the two people on planet earth who were never meant to abandon her, and help that place of derailment, unhealthy independence, and lack of trust heal.  Through trust.  Love.  Patient words.  Slow responses of healing and empathy instead of quick reactions of anger.  And that is so tough to do for someone who is a recovering control addict herself.

Becoming the Beloved of God is hard.  When all you can hear are the voices of failure whisper their way through your day, it is so hard to believe, I mean really believe, you are the Beloved, the beautiful, and the valuable of God.  Becoming the Beloved takes intense focus, concentration, and consistency in training our ears to listen to the Voice of the One who loves us, made us, and calls us His own.  And just as I have needed time and grace to become the Beloved of God and to pull the truth of who I am into the rhythms and specific realities of everyday life, Mia Grace has needed that time and grace too to become my daughter in the daily rhythms of everyday life.

So one year in, both Mia Grace and Mommy are still working on becoming children instead of orphans – me a child of God, and Mia Grace a child of mine.  But we are learning, she and I.  We are learning how to become, how to rise up from set backs, how to recover from falls, how to say “I’m sorry” when we’ve failed, and how to believe God works all things for the good of those who love Him and are called according to His purpose as His Beloved. 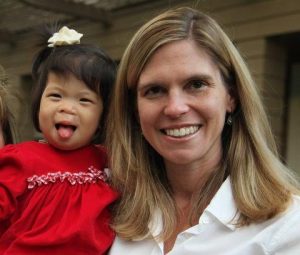 Hi, I'm Susannah. I’m a writer, Bible study teacher, and founder of Restore. After walking through my own journey of healing and restoration, I live with this vision in my head and heart - Restoration for a Generation.  Restoration that begins with you and me.