On September 9, 2015, Posted by Susannah Baker, in Adoption, Adoption in Real Life, With 7 Comments

I know I haven’t posted in a while…and for that, I apologize.  After all of the adrenaline and excitement involved with going to China to get Mia Grace and coming home to introduce her to her new “normal”, all of the words just…left me.  That’s not entirely true.  The words were still there, circulating beneath my thoughts and our days; it was just that I was too weary to let them out.  I think both Jason and I discovered that while we were prepared (at some level) for food issues, sleep issues, attachment issues, language issues, what we were not prepared for was the issue of…weariness.  Attaching to an 18 month old you have never met, is from a different country, is used to a different language, different food, and whole different way of doing life is plain ol’ exhausting.  So Jason gave our family a gift that was a blessing beyond words – a week at the beach.

The big girls don’t start school until after Labor Day (today in fact!), so we packed up our swim suits, flip flops, and t-shirts, and spent a week in Florida.

It was heavenly to do nothing but sit in a chair or in the sand and look out over the wide expanse of sand and sea and simply soak in beauty while enjoying the company of one another’s presence without any other demands.  Our biggest decision of the day was when to go frequent our favorite snow cone trailer truck in the little town close by, just a bike ride away. 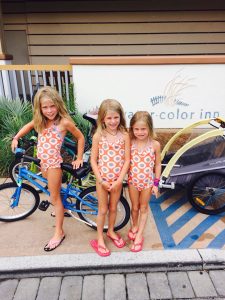 I wasn’t sure how Mia Grace would respond to the texture of sand or the wide expanse of the sea, but to my surprise and delight, she loved every minute of it.  She loved running the tiny grains of sand through her fingers and loved the feeling of sand poured over her toes.  She dug in the sand for hours with her small shovel and pail underneath the brim of her big pink hat.

And she loved being held out in the blue waters with daddy, her big brown eyes wide as she slowly took everything in, including the salty waves.

More often than not, Jason and I are mountain people.  We love to hike, conquer a peak, conquer a trail, and soak in mountain air and mountain views.  The majesty of the mountains moves both of us in ways the ocean sometimes does not.  But this week, instead of the mountains, we both instinctively knew we needed the beach.  It took me getting there and looking out at the view multiple times before I finally understood why.

While the mountains represent the glory and majesty of God in my life, almost a mysterious calling to go up and beyond to new heights and new adventures, the ocean represents, to me at least, the love of God.  It is as if this wide, warm blanket is spread out over the earth, stretching as far as the eye can see.  And with each wave that the tide brings in, the words are heard in my heart and soul, “You are loved…you are loved…you are loved.”

I think that’s what Jason and I and the girls needed to hear.  Because after weeks of learning to love this new little person in our midst, we needed to hear that we were loved as well.  We were cared for under the blanket and tender care of God’s love while pouring out love on another.

A picture of this came so vividly and beautifully the last morning of our trip.  Well, let me back up.  The first morning of our trip, we gathered up all of our beach gear, lathered everyone in sunscreen, and headed down to our spot by the water.  We were still getting situated when the guy under the umbrella next to us said, “Look!  There’s a dolphin!”  We looked up to see a family of five out in the surf with a five to six foot long, dark shape gliding in the waves just a few feet from them.  It didn’t take long to realize from the fin on the back and the angles on the body underneath that was no dolphin…it was a shark.  Apparently, the family in the surf realized the same thing and made a bee-line out of the waves back onto the safety of the shore.

For the next thirty minutes or so, not one shark, not two sharks, but five or six sharks made their way to the edge of the surf, coming so close to the shore you could almost touch them.

If you are like my husband, Jason, then seeing sharks that close up in the surf just about makes your day.  He was so gleeful, so excited, he waded OUT IN THE MIDDLE OF THE SURF to try to get a close up view.  Geez.  Ever since I’ve known him, one of his life aspirations is to go down into the shark cages off of the coast line of Australia or South Africa to get a close up view of the great whites.  No thank you.  No sir.  Not me.  Just the mention of the word “shark” sends a cold feeling down from my spine into my toes.  Not only was I up on the shore at first mention of the word “shark,” but I stayed up on that shore for the next two days.  I like the safety and security of the sand between my toes more than the possibility of a shark nibbling on them.

We never saw the sharks again after that first day (thankfully), and I eventually did get in and enjoy the water, but every time I was in the water, there was always a near by thought that the sharks COULD reappear.  But at some point, the decision had to made to resolutely forget about the sharks, or the possibility of them, if the water was ever going to be enjoyed.

So the last morning of our trip, I was on an early morning run on the beach.  Not many people were out, and if they were, they were walking or running along the shore like me.  But along our stretch of beach, only two people were in the early morning waters – a daddy with his little boy who couldn’t have been more than 18 months old, blonde curls bobbing on his head, and his orange pacifier still in his mouth.  They were enjoying the vastness of the ocean, just the two of them, probably trying to beat the heat of the day.

It was such a beautiful picture – a big, strong daddy holding his young son safely and securely in the waters.  And all of a sudden, the reasons for our trip became crystal clear.  “You know” the Lord whispered to my heart, “that’s why I brought you here.  Out in the ocean, anything can happen.  Anything can swim up.  There is so much to fear.  But not when you are in My Arms.  In My Arms, you are safe and secure, you have nothing to fear, and the rhythm of life is the rhythm of the waves, ‘You are loved…you are loved…you are loved.'”

The past two months with Mia Grace have felt a bit like that first day on the beach with sharks in the water.  There has just been so much unknown.  Anything at any point could come up and grab you taking sleep, taking rest, taking security, from her mainly, and from us as well.

But our time at the beach was a reminder that in the unknown, the love of the Father holds us, comforts us, and gives us the ability to take delight in the process of loving and being loved, no matter what may come.

Underneath that blanket of love and thankfulness we rested and came home, ready to start the school year, ready to continue through the new normal with Mia Grace.  Sometimes that’s all we need – not another adventure and not another activity – just another reminder of His arms, holding us close in the vast expanse of His love. 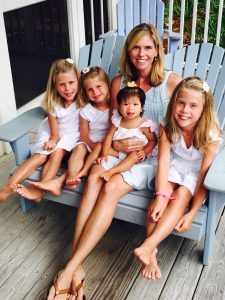