On October 12, 2013, Posted by Susannah Baker, in Encouragement, With 2 Comments

Last weekend, I had the privilege of traveling to Annapolis, Maryland to visit the United States Naval Academy with my mom, dad, brother, Jason, and our two oldest girls.

We were all there for a reunion – a reunion that probably seems small to most but was of epic size to our family. Fifty years ago in the Fall of 1963, my dad played for Navy in the Cottonbowl against the University of Texas. Their quarterback, Roger Staubach, won the Heisman trophy that year, and Navy went undefeated against some of the best teams in the nation, including Notre Dame, Michigan, Duke, and Army, their biggest rival. President Kennedy was assassinated just eight days before the Army/Navy Game was to be played, and the game was almost called off. But word got out that Jacqueline Kennedy, the First Lady, wanted the game to go on since the President would have wanted it that way. JFK was a U.S. Navy enlistee and made no secret of his love for the school and the team. Prior to the 1962 season, the President stopped to meet the team and shook every player and coach’s hand (Gary Lambrecht, “1963 Navy Midshipmen”). The Cottonbowl was played in Dallas, Texas, the same city where the President was shot just weeks before. And while Navy lost that day against the University of Texas (the reason why burnt orange was never tolerated in our house growing up, even though we are all native Texans – sorry, Longhorn fans), they still ended up the number two team in the nation. Not bad for a bunch of midshipmen.

While we were there, we saw lots of things that made lasting impressions on my heart and mind…the brigade of midshipmen marching in a formal dress parade reviewed by the Secretary of the Navy… 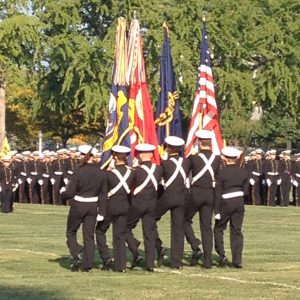 …the girls standing in front of the statue of Tecumseh, painted in his game day war paint from head to toe…

…but one thing stood out to me more than all the rest. It was where the Navy vs. Airforce football game on Saturday was played. Navy’s stadium is called The Navy Marine-Corps Memorial Stadium, and like most football stadiums around the country, it has several decks of seating, rows and rows of bleachers, concession stands, and lots of enthusiastic fans. But one thing was different: what was written on the walls around the stadium. Instead of records of national championships or victories won or the names of great players, what is recorded are the names of battles fought by the Navy and the Marines. Battles where men and women lost their lives on the playing field so that those of us in the stands could live.

I couldn’t keep my eyes off of the words – Normandy, Wake, Pearl Harbor, Midway, Iwo Jima, Okinawa, and the list went on and on. It was as if the players on the field were pointing to a greater battle they will fight one day off of the field. Battles that could cost them their lives – all for the sake of yours and mine.

And it reminded me to take stock of the way I live my life each day. For we are all on a battle field. Souls are lost for all eternity moment by moment and second by second while I am consumed playing life’s foolish games. It reminded to put my heart and soul in the game of each day before me, to remember why I am here, to count the cost, to take risks, and to make proclaiming the Name of Christ the banner under which I live and the reason why I play.

I am so very thankful for the men and women who have given their lives for my physical protection and freedom, and I am even more thankful for the Man who gave His life for my spiritual protection and freedom. My prayer is that the life I live, day in and day out, be worthy of the One who has given His Life for mine. May I live in such a way as to honor His sacrifice and the sacrifice of those who have gone before me.