On October 3, 2016, Posted by Susannah Baker, in Encouragement, With 2 Comments

Today, we have the privilege of hearing again from my friend, Margaret Austin, wife to Thomas, mother of three beautiful, young children.  To read more about Margaret from a previous post click here.  Otherwise, sit back and enjoy another perspective on hope when Jesus heals us maybe not as we had expected or hoped He would, but along the way of whatever road He has called us to walk, no matter how uncomfortable it may be.

On the way to Jerusalem [Jesus] was passing along between Samaria and Galilee. And as He entered a village, He was met by ten lepers, who stood at a distance and lifted up their voices, saying, “Jesus, Master, have mercy on us.”  When He saw them He said to them, “Go and show yourselves to the priests.” And as they went they were cleansed. Then one of them, when he saw that he was healed, turned back, praising God with a loud voice;  and he fell on his face at Jesus’ feet, giving Him thanks. Now he was a Samaritan. Then Jesus answered, “Were not ten cleansed? Where are the nine?  Was no one found to return and give praise to God except this foreigner?”  And He said to him, “Rise and go your way; your faith has made you well.”

In a recent bible study, one of the writers highlighted those verses that read “and as they went they were cleansed.” I have been thinking over those verses all week. I’d never noticed them before – most sermons or children’s bibles highlight the importance of the one Samaritan leper returning to thank Jesus. While the lesson on thankfulness is surely a crucial part of the story, I cannot shake the line “and as they went they were cleansed.” Jesus could have healed the 10 lepers right there on the spot with a word, a touch, a look, or simply a thought. But He didn’t. He told them to “go and show themselves to the priests.” And based on my research, they didn’t even have to go all the way to the priests. They were healed “as they went,” or “on the way,” so they knew without a doubt that Jesus had done this thing for them. Why do these words resonate with me so much?

My husband works in a very uncertain business. The life of a professional football player is extremely uncertain, and the life of a football coach is only a shade less so. I recently googled Thomas when I was helping him look for a headshot for a school assignment, and this is the complete list of his transactions in the NFL – starting with the most recent and ending with his first contract with the Minnesota Vikings.

I hope you didn’t miss that time he was cut on Christmas Eve! That was a dark day in our household and I didn’t have kind words to say about very many people. But I digress.

What does getting signed/released that many times in the NFL have to do with the 10 lepers? Our NFL prayers were never answered the way we thought they should be. Jesus didn’t just immediately touch us and give us success. Thomas never got a big contract, lots of playing time, or a fabulous platform to proclaim the name of Jesus. (Many of our friends in the NFL have that kind of platform, and I am so very grateful that they have it and use it for the glory of God.) But we never had that, and for awhile it really confused me. Were we sinning, that this was kept from us? Did we need more faith to attain success at the next level? If I’m honest, it felt like God was dangling a carrot in front of us and then would whisk it away at the last second, just as it seemed things were about to fall into place.

But as we went, we were cleansed.

God kept opening doors for Thomas in the NFL. And we kept walking through them, even though it felt ridiculous and uncertain and uncomfortable. And God used those times in our lives to sanctify us – to make us more like Him, to draw us to Himself, to cleanse us. We met countless believers along the way who opened their homes to us. I especially witnessed and learned the art of hospitality from more women than I could ever count (Susannah being one of them!).  Thomas watched men lead on the field, both good and bad, and took mental notes that will last him a lifetime.  He experienced many failures that have molded him and shaped him more than we may even realize.

We aren’t sure what God will lead us to after Thomas graduates from his masters program at Clemson in December, but I pray that we will continue to go forth as God calls us to be cleansed. Sometimes the cleansing scares me, because Jesus calls us to walk on down the road. We can’t always stay there with Him and just ask Him to simply touch us in order to heal us, even though that would be the more comfortable, preferable option. No, He calls us to move out in faith over and over again throughout our lives. But we cling to the hope that as we go, we will be cleansed.

How is God calling you to walk down the road in faith in order that He may cleanse you? Are there things that God is calling you to that are uncomfortable? 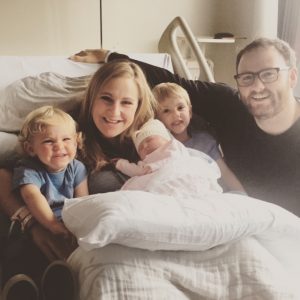