On April 3, 2017, Posted by Susannah Baker, in Encouragement, Motherhood, With 7 Comments

Softball season is upon us.  Two of our girls are playing in a league this year, and, by happenstance, both girls’ teams are called Fury.  Same team name, same uniforms.  It makes for some pretty cute pictures.

Dinner seems to be pushed back later and later as the light lingers longer and Jason stays out in the yard giving bp to the girls or drilling them on grounders.  I have to say, with four girls, so many of the practical life lessons or duties fall upon me to do.  For the most part, girls just aren’t going to go their dads for lessons in fixing their hair, picking out clothes, recovering from hurt girl feelings, or taking them to the ladies’ room in a public setting (a new accomplishment for Mia Grace in our house this week).  So softball is one area where daddy is fully in charge in our house, and I am loving it.  It gives the girls good time to learn how to listen to their daddy’s voice.  “Stay low…eye on the ball…move towards the ball…swing hard…hands in front…use both hands…listen to your coaches.”

One of the many things that makes softball so much fun this year is that Lillian gets to play on the same team with her cousin, Katie.  This year is the first year that the kids begin to pitch instead of the coaches, and Katie is our team’s pitcher.  Bless her.  Most of the weight of the game rests on her ten-year-old ability to pitch, and for a laid-back soul like Katie, that pressure is something to which she is adjusting.

Katie is known in our extended family as “The Teletubby.”  If you don’t know what a Teletubby is, or need a memory jog, here is a reminder:

Katie typically lives in what we all affectionately call “Katie’s World,” and her answers to questions are usually monosyllabic sounds, not words.  Her favorite animal is the unicorn, and one of my

favorite memories of Katie is when, for the first grade book fair, she came in full unicorn costume from head to toe.

So seeing her in this new role as a serious, focused, softball pitcher is something to which we are all adjusting.  My husband finally had to tell his sister, Katie’s mom, to zip her yapper and stop yelling instructions to Katie from the bleachers: “Keep your shoulders squared!”  “Get the ball out of the dirt!” “Keep your hand flat!”  “Focus!”  I had tears in my eyes from laughing so hard after watching Cara watch Katie pitch.

Last weekend’s game started off well for Katie, but she wasn’t feeling great and was struggling with one of those deep-Houston-allergy-induced-chest-coughs that we all have around this time of year. By about the fourth inning, our lead was slowly being eaten away by Katie’s balls ending up in the dirt or way above the catcher’s head.

That’s when my brother-in-law, Katie’s dad, called a time out and walked out to the pitcher’s mound.  He stood there for a few minutes, toe-to-toe with Katie and spoke quietly in her ear.  Then he walked off, and the inning resumed.  And Katie struck out three batters right in a row, throwing all perfect pitches.

What was the change?  Was it a new vitamin or supplement he slipped her?  No.  Was it a change of uniform or new piece of equipment he had her put on?  No.  Was it any sort of disciplinary action he administered?  No again.  The change came from hearing her father’s voice and the wisdom that went along with it and obeying his instructions.

My brother-in-law played in the Major Leagues for over fifteen years and knows the game of baseball as well as anyone.  He has watched pitchers struggle in the little leagues, the minor leagues, the major leagues, and even during the World Series.  He has encouraged teammates who are now in the hall of fame, and he now coaches high school and little league teams to encourage younger players.

As I sat there and watched, I realized I could learn a powerful lesson from Katie.  Life is full of stressful moments.  Every day I throw all sorts of pitches from the pitcher’s mound to my kids, my spouse, my friends, even acquaintances. A few are in the strike zone, but most are either hitting the dirt in a sharp word I’ve said or going way over the catcher’s head in moments of weariness and exhaustion.  Going through the exercises of daily life at the speed with which life happens around here with four young children in the last eight weeks before school is out leaves me little time to really stop and think about how to improve my game.  Most days, my feet hit the floor and I am throwing pitches as fast as I can just to keep everybody moving in the same direction, preferably sane, clothed, fed, and with as few tears as possible (a huge feat in a household with five women, six including the cat).

But like Katie, I not only have a good father, I have a wise father, who often calls time outs on my behalf from the dug out and ascends the pitcher’s mound.  And it is there, in those quiet places, that He counsels me, encourages me, advises and instructs me, if only I have the heart to listen.  My Father’s Voice steadies my frayed nerves when life is happening ninety to nothing.  My Father’s Voice corrects my stance and steadies my heart when my emotions are out of control.  My Father’s Voice cleanses me of my guilt and gives me second chances after my decisions hit the dirt or are so far out of the strike zone I think I should be pulled out of the game.

And like Katie, I have a decision to make.  I can let my Father’s Voice redirect the decisions I make in finishing out the game of the day, or I can try to keep playing in my own strength and skill set, with the balls hitting the dirt.

Today, like Katie, listen to your Father.  He is more skilled than the best baseball player that has ever played the game.  He is wiser than the most seasoned coach.  He is more magnificent than the greatest hall of famer…and it is your heart that He loves to coach, counsel, advise, and come alongside.  Day by day, moment by moment, hour by hour, you have access to the greatest Father a daughter could ever have.  So tune your ears to His Voice, follow the instructions He so wisely gives, and finish your game.

Yesterday, the girls had another softball game, and Katie held our team’s one run lead in the last inning.  She pitched like I had never seen her pitch before.  And when she struck out the last batter, and the game was won, guess where she ran?  Straight into her father’s arms.  Like Katie, do the same with your Father today; His arms and His Voice are waiting. 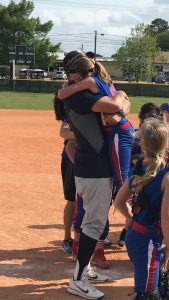 I wanted to let you all know that I will not be blogging as often during this season of spring, softball, and end of school. I am in the process of writing a new study for women that I am really excited to share with you all this summer. My goal is to have it ready to go by the beginning of June, so please be on the lookout for that & in the meantime, I would appreciate your prayers for the time and creative energy I will need in order to listen to the Lord and put on paper what He is speaking to my heart.